Big Bird Made Me Watch

Video is a filthy medium. The trade tool of porn and piracy. The first peek at the scene of a crime. The final lecherous glimpse at a night of debauch. Immediate gratification is the essence of its stock. Remember video tape with its jittery image and muted colors all smeared across the screen as it stretched over time? Its degenerative nature corrupted the world that it archived. An old video isn’t gentle on the eyes. It has none of the romance of a cinematic classic, dutifully recovered from faded cellulose. Nothing was ever safe on videotape. Cheapness betrayed its content.

Transgression flourishes in video, most potently when eyewitnesses are few. It taunts us with the thrill of secretly stepping outside of the mundane, our furtive pleasure revealed at the corners of our lips, turned upward ever so slightly. We look at others and think, “You have no idea how bad I am.” And there’s video to prove it, somewhere on a shelf, in plain sight behind a cryptic label.

Video is stealthy. It requires no processing lab, where morally guided eyes might keep watch. Its insularity and ease of use invites impropriety. But it is also the medium of Sesame Street and every other children’s show of decades past, its innate nostalgia surfacing in the worn corners of the VHS sleeve. Meanwhile, rows of homemade tapes, lined up like the old Encyclopedia Britannica, offer a library of family memories. Pop a cartridge in the machine and watch dear ole' dad leer from behind the camera’s peep hole, unaware of the implications of his gaze, cast first on his wife, then daughter, then son, while clumsily zooming in and out, in and out.

Now the technological landscape is shifting toward an exponentially more crystalline vista. High Definition has taken video to another level of perversity. Transgressing the norms of depiction, its hyper-reality pushes us past the edge of comfort, confronting us with clogged pores, nose hairs, razor burn and the lingering scars of venereal disease. Too much information.

But this is what we crave. Information. And video allows for facile exchange. Record. Download. Send. Swap. The technology encourages us to share, so that one might bask in the glory of another’s dirty deed.

I’m being hazed. My freshman status requires that I watch every abominable flick that passes through the shop. During lunch. The tapes assert our deviance in the face of Kermit and his creator, then dead only five years. They have traded hands countless times, each a copy generations past the original, and the soft texture on screen gives them a ghostlike aura. They smack of that catalog of domestic memories, of black plastic slabs labeled with sparse words. But instead of “Disney World!” or “Telluride,” there are phrases like “Fat Grannies,” “shit eat” and “Twilight Zone.”

Lunchtime food run. Coworker Larry and I are doing a flat out burn, 90 miles an hour, in his Nissan Z back to the shop. I ride shotgun, balancing a stack of warm Styrofoam trays that squeak with the vibration of the low-slung chassis. Larry is the veteran perv at Henson. His boyish face is deceiving, and he laughs through perfect teeth, yelling across a hot wind that pours through the windows.

“You know what’s wrong with you? That pretty smile of yours. It needs more soot, so I picked today’s feature just for you, bro. This fucker will loop in your head for days."

Larry drives inches behind the rear bumper of a VW bus that putters in the left lane.  "I like you, Georgie. You’re not like the rest of the girls.”

Back in the conference room, I sit beside an eight foot Big Bird. His dopey eyes loom as I peck at a cold hamburger and squint painfully at the infamous deathly outtake from Twilight Zone, The Movie. Vic Morrow cradles two children as a falling helicopter blade wallops them into  pink mist. The actors die in slow motion to the creepy warble of a Moog Synth soundtrack. The video stutters then blinks; the tracking is off. Larry Laughs, unrepentant. I go back to work, sensing that a part of me has withered. Then it dawns on me, that when doting parents and their kids sit down to watch tomorrow’s episode of Sesame Street, I will know something that they do not. Big Bird will know it too. It’s an awful thought, but the delight at the corners of my lips betrays me. 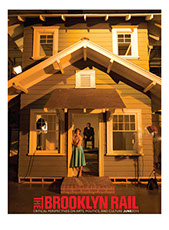